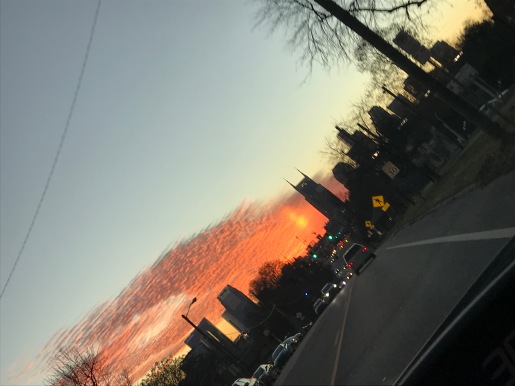 Jimmy was two minutes into his run when he felt winded. It’d been, what, a week since his last run outside? That’s his habit. He runs every day for a week. Feels great. Gives himself a break and then the running stops. He feels too good to determine that he needs to keep going, and then he has to find a way to bring himself back up once he collapses into a rut of reading and cleaning. His apartment is too clean, germ-free but sterile. Antiseptic, as a girl once told him. No paintings on the walls, no stray cups in the sink. The bathtub so spotless he can almost see his reflection in the porcelain. END_OF_DOCUMENT_TOKEN_TO_BE_REPLACED

Pam and I sat in the tree for two hours, mainly watching and listening, and waiting. Occasionally she would ask me a question about my past, but nothing that felt too intrusive. None more than I expected, in any case.

“How did you get here? How did you know I could fly? Since when could you fly? Do you think we’re the only ones? Why do you think Mallory got so interested in you? What are we looking for?”

At almost every question, I simply shrugged and replied, “Dunno.” I don’t think she was happy with that answer. Heck, I wouldn’t be. The only thing more frustrating than a question falling on deaf ears is an answer that has no place.

But then, she asked, “What are we looking for?” To which I believed the answer to be obvious:

And then it came: “Yes, but…also, you know, the whole not-human thing.” She wasn’t being sarcastic, or mean, but the comment still stung. All the time I’ve been here, I feel like I deserve to be called human despite my biological makeup. I’ve done a pretty damn good job of mimicking this species over time, I consider myself one of them.

I’ve lived in this city since a time prior to the first skyscraper. I like to put it that way because it’s more poetic than “one hundred years”. Also, I prefer the time when there were no skyscrapers. They’re not ugly, exactly, just unflattering and, frankly, too imposing. Walking between them, always looking up, you feel a sense of unworthiness which is just offensive. We’re all worthy, you and I, so why did we build such imposing structures to remind us how small we are?

I suppose we need to be reminded at times. I certainly do. I felt like a big fish in a small pond when I came to this planet with my son. He was tiny, then, no bigger than, well, a goldfish. (Ha ha ha. Isn’t it funny how your metaphors can actually reflect the truth more than you thought they would when you first thought of them?)

But to answer Pam’s question, I simply said, “My son looks like I did when I was very young, yes, but he’ll soon grow to be like me, maybe even bigger. The air here is much more healthy than I’d experienced as a youngling.”

She smiled, eyes searching the park. I don’t believe she even knew what we were looking for, but like many of our people, instinct took over. “When did you arrive on this planet?” I asked, careful to keep my voice low. In my hundred years in this city I’ve only met a very few others of my Kind, and none of them liked to talk about their past lives, their differences to humans.

“I was born here.” She replied, as though I was silly for even asking. This shocked me. We’ve not been here very long, so anyone born here should still be, well, like my son. Incubating.

“I knew Lenore in school, we became close. That’s why I’m able to still be ‘Aunt Pam’ to Mallory. But they don’t know me, truly, the way you seem to know me.” She looked at me then, questioning. “How did you know? That I was, well, different.”

I raised my eyebrows. “You seemed not surprised when we flew.”

She nodded, bowing her head. “Obviously. Stupid question. So, tell me more about your son, so I can spot him.”

I stopped because there he was, sitting at the edge of the pond below us. For days I’d waited, and not a sign of him. Then, suddenly, he was there, right below us. I could almost smell his breath, the moss and dirt and corroded scent of death that always lingered after he left your presence. He was taller than I remember, but it’d been so long…

“What? What is it?” Pam was begging me for an answer, for I don’t know how long. I looked over and she’d been tugging at my sleeve, I must’ve drowned her out in my focus, my sudden hypnosis at seeing my brother for the first time in a hundred years.

“TRENT!” He shouted, still looking out over the pond. He removed his hat, and his bald head was covered in dirt, almost completely black. “I’VE JOURNEYED LONG TO BE HERE SINCE YOUR FAILURE. THE LEAST YOU COULD DO IS LOOK ME IN THE EYES BEFORE I KILL YOU.”

I’m a ridiculous man who asks ridiculous things of ordinary people. The problem is, life isn’t as ordinary as it once was, not by a long shot. I was a boy when things changed, and I’d like to take this opportunity — while I’m out of the house and waiting for a reply to my two-headed-duck — to write about those changes. Perhaps readers might better understand why the Box has become so important to me. Perhaps people of all stripes will begin to comprehend the magnitude of the dangers I’ve faced — that we’ve all faced — through these times.

Or maybe no one finds these papers at all, and they will be lost with me as I’m taken and disposed of, the Box to remain empty forever.

When I was a boy there was only the night sky. There were stars in the sky that sparkled like flashing headlights at the far end of an alleyway. The stars twinkled and were able to light up our paths to and from home, but otherwise light never touched us. There was no sun, there was no moon. It was a strange time, full of earthquakes and uncertainty. East and West seemed to switch with the wind currents, and gravity was as stable as a bucking mule.

We pretended we were flying, and there was no height that was too high because height wasn’t a concept for us. My parents used to say that up and down were fantasy words created by a mad scientist who wished only madness on the world. I now agree with that sentiment. The world has fallen to madness of endless degrees. We tried to stop it, but as you well know, once light shines through a crack in the sky, there’s really no way to block it again.

So it was that our Sun was birthed, when one Mad Scientist blew up the sky.

This may sound like poetic nonsense, but I can assure you, as can anyone from my generation, that this was really the way it was. When the sky exploded, the Sun burst through and all of the stars faded away to nothing. We have daylight, now, with a few hours of darkness at night. Our world is spinning on an axis that another Mad Scientist created, and then the Moon revolves around us, a moon that, you guessed it, was created by another Scientist — my father. The only sane person in the universe.

Were these Scientists actually ‘Mad’, you are probably asking, or were they just experimenting with measures beyond their control?

My father was a nice man who only had nice things to say about everyone he met. Tall with wavy blond hair that everyone thought was a wig but actually wasn’t, my father commanded a room once he entered, and inspired people to only talk nicely about each other, to encourage future projects, and to produce helpful things to help our kind.

But one week the sky was bright and dark and bright again, and the dark sky (“night”) brought sadness because it was empty. Even stars that had traveled farther away were not shining any more. None of us could see anything, so we stayed inside at night. Noises boomed, houses shook, and then there was a blinding moment when day and night were the same.

Thus the Moon lit up the sky, when my father sacrificed his greatest invention to give us a moment of hope in the darkest of times.

I didn’t hear from my father again until his whispering voice brought me to the park and told me to count the grass, many years later. This was after the Four Wars and just when the Accords were struck, right at the time when peace found our world and brought everyone, home and abroad, to a standstill – creatively speaking.